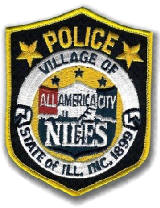 Officer Steven Zourkas was killed in an automobile accident at the intersection of Golf Road and Western Avenue while en route to a call at approximately 04:00 am.

Officer Zourkas was responding to a disturbance call at a restaurant when he lost control of his squad car. The vehicle flipped onto its side and crashed into several parked cars and a sign in a condominium complex. Witnesses reported that he swerved to avoid a pedestrian in the roadway. Officer Zourkas was pronounced dead at the scene.

Officer Zourkas had served with the Niles Police Department for four years and had recently joined the North Regional Major Crimes Task Force as an evidence technician. He was survived by his wife and two sons, one a 4-month-old newborn.