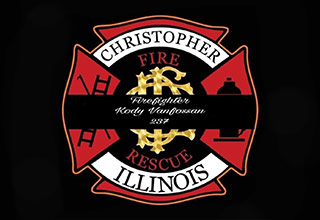 Kody Vanfossan died doing what he loved while battling a six-alarm commercial fire in Christopher, Illinois. Christopher Engine 201 was the first on scene, with a report of a squatter possibly being in the building. Kody and his father, a CFD captain, did a primary search of the first floor. After completing the search and knocking the fire down, they proceeded to the second floor. During this time, conditions deteriorated rapidly. His father decided it was time to get out. When they reached the landing, the stairway collapsed. They were trapped in the building, and his father put out a mayday. Mutual aid departments were able to locate and rescue his father within half an hour but were unable to locate Kody. After several attempts, Kody was located at the ledge of the landing, and his body was recovered four hours after the initial mayday call.

He was born in Carbondale to Brent and Mindy Vanfossan on November 15, 1994, and spent his whole life in his hometown. He was a third-generation volunteer firefighter, following in his father’s and grandfather Vanfossan’s footsteps. He joined the department as a cadet on November 15, 2010 and had nine years of service. From an early age, all he wanted to do is play football and become a firefighter. At age two, he had his own set of bunker gear and never missed an opportunity to go to the fire station. He was taught to roll hose at an early age and helped at the station after a fire.

He graduated from Christopher High School in 2013. He played football all four years and was like a brick house. He would stand up from the line and was unmovable. When it came to firefighting, he was like a bull in a china shop. He always knew what his job was without being told. He loved to train every chance he got. He always said, “Don’t Train Until You Get It Right. Train Until You Can’t Get It Wrong.” Kody always had his orange BadAxx that he received for Christmas in 2016 with him when he was in bunker gear.

Kody was a stubborn, bullheaded kid, but he would help a complete stranger at any time, no questions asked. His kind heart and willingness to help others earned him countless friends in and out of the fire service. Kody had strong morals and always put others first. He was positive, funny, and selfless, with a unique sense of humor. He left a hole in the hearts of his parents; his brother, Garrett Vanfossan; his sister, Paige Vanfossan; and his son, Erik Vanfossan. He will be missed by countless loved ones whose lives he touched.