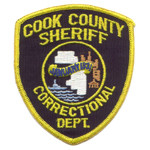 Correctional Officer Nikkii Bostic-Jones was struck and killed by a hit-and-run driver on California Avenue while walking from the sheriff’s office parking lot to the maximum security wing of the county jail just before 11:00 pm.

As she crossed the street she was struck by a van, causing her to be thrown into the path of an oncoming sheriff’s office patrol car. She was transported to Mount Sinai Hospital where she was pronounced dead.

The driver of the van fled the scene but was arrested several days later. He was charged with reckless homicide, driving on a revoked license, and multiple other violations.

Officer Bostic-Jones had served with the Cook County Sheriff’s Office – Department of Corrections for 12 years. She is survived by her husband, 6-year-old daughter, and six siblings.