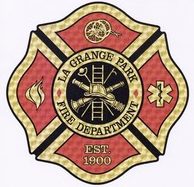 On May 4, 1999, Chief Arthur “Bucky” Tullis of the La Grange Park Fire Department died in the line of duty while responding to an automatic fire alarm at the Bethlehem Woods Retirement Center. Tullis arrived on the scene at around 3:30PM, four minutes after the alarm was received, and began to investigate the cause of the alarm activation. After making initial contact with a building representative, Tullis exited the building to begin command operations for incoming fire apparatus.

Upon exiting the building, Tullis suffered a heart attack and collapsed on the front driveway of the complex. Personnel from the first arriving fire company, Ambulance 1115, began resuscitation efforts, and they were soon assisted by firefighters from Truck 1119. Shortly thereafter, Engines 1212 and 1222 arrived and secured the fire scene. Tullis was transported to La Grange Memorial Hospital, but efforts to revive him were unsuccessful. He was pronounced dead at 5PM.

Tullis joined the La Grange Park Fire Department in 1964 and served for thirty-five years. He was promoted to lieutenant in 1978, to captain in 1986, and to deputy chief in 1986. When Chief Gil Welch retired from the department in 1987, he handpicked Tullis as his replacement. During his twelve years as chief, Tullis was the only salaried firefighter in the paid-on-call department. From the mid-1950s until his retirement in 1994, Tullis worked full-time as a lineman for Ameritech.

Beginning in 1995, Tullis spearheaded a major effort to raise $85,000 for a new ambulance by selling engraved bricks that were installed in a “Walk of Life” outside of the La Grange Park Village Hall. At the time of his death, the “Walk of Life” fundraiser had collected more than $80,000 in donations. More than two hundred mourners marched in procession behind the fire apparatus that carried the casket from the church to the cemetery.