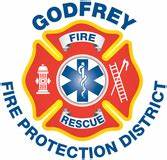 Jacob L. Ringering lost his life in the line of duty on March 5, 2019. Jake and his crew responded to a working residential structure fire. While performing exterior fire suppression activities, he sustained fatal injuries in a partial structural collapse.

Born December 14, 1981, Jake grew up around the firehouse and enjoyed hunting, baseball and hockey. His genuine character formed many lasting friendships. Jake aspired to become a pilot, but after becoming a paid-on-call firefighter in 2001, he found his true calling. He eagerly pursued his dream, earning an associate degree in fire science. In 2005, Jake was hired with the East Alton Fire Department, where his father and grandfather had worked.

In 2010, Jake joined the Godfrey Fire Protection District, where he moved up the ranks to lieutenant and captain. He ranked first for assistant chief and would soon command his own shift. He earned Illinois Office of the State Fire Marshal certification in 17 areas and was an EMT. Jake served as technical rescue officer, respiratory protection officer, lead instructor, and president of Godfrey Firefighters Local 1692. He taught fire science at Lewis & Clark College and Max Fire Training. Jake’s dedication impacted many lives, and countless individuals are alive today as a testament.

A natural leader and trusted mentor, Jake was respected in the fire service. He led by example in accountability, professionalism, knowledge, and compassion. He believed in physical fitness, quality training and continuing education. Phenomenal at anything hands on, especially ropes and knots, Jake’s charisma made others want to learn about the job. Working alongside his younger brother, Jake’s influence was an inspiration to many.

Jake was a humble man with a strong faith, a devoted husband and father. Jake married Allison in 2009 at St. Mary’s Catholic Church. They welcomed two daughters, Nora and Elaina, and their son, Logan, completed their family. Jake’s greatest joy was his children. He spent his days at home taking care of them, actively present in everything family related. The extraordinary love he gave during their cherished time together created an unbreakable bond in the hearts of his children, who adore their dad. Jake’s loyalty instilled that family comes first; a model by which he lived.

Jake was an incredible person, firefighter, and family man. He is missed beyond words by his wife and children, family, friends, fire department family, and countless others whose lives he profoundly touched.